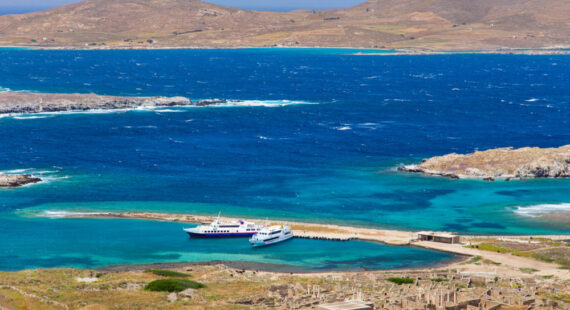 Delos, the birthplace of Poseidon and Apollo, was once a flourishing cosmopolitan city-state and home to one of the most important religious center in the ancient world. The island’s archaeological site is one of the most impressive in Greece and routinely visited by thousands of travellers each year.

It is considered an archaeological site which “conveys the image of a great cosmopolitan Mediterranean port” and is currently on the UNESCO World Heritage List.

Delos is a small island, barren and without vegetation, which does not exceed an area of 3.5 square kilometers. The landscape of the island is characteristic of the Cyclades and it is famous for its historical value. It was under Mount Cynthus that the sanctuary dedicated to Apollo (called in Greek “Apollo Delios”) and his sister Artemis was built, as well as the Hellenistic city around.

Due to the frequent changes in itineraries, please contact the Mykonos-Delos Consortium, or the Mykonos Sea & Sky Travel Agency

This website uses cookies to improve your experience while you navigate through the website. Out of these, the cookies that are categorized as necessary are stored on your browser as they are essential for the working of basic functionalities of the website. We also use third-party cookies that help us analyze and understand how you use this website. These cookies will be stored in your browser only with your consent. You also have the option to opt-out of these cookies. But opting out of some of these cookies may affect your browsing experience.
Necessary Always Enabled
Necessary cookies are absolutely essential for the website to function properly. This category only includes cookies that ensures basic functionalities and security features of the website. These cookies do not store any personal information.
Non-necessary
Any cookies that may not be particularly necessary for the website to function and is used specifically to collect user personal data via analytics, ads, other embedded contents are termed as non-necessary cookies. It is mandatory to procure user consent prior to running these cookies on your website.
SAVE & ACCEPT